Were you looking for Luke (human)?

Luke is an Irish narrow gauge saddle-tank engine from The Island Of Sodor.

Luke is a plucky little pea-green tank engine who once hid in guilt from a terrible, dark secret, only in the knowledge of the other narrow gauge engines, believing that he had caused a yellow engine to fall into the sea. Fortunately, he befriended and trusted Thomas, who investigated and realised the yellow engine was Victor and that the accident had not been Luke's fault, managing to clear his name. Luke is a gentle, sensitive soul and is bubbling with enthusiasm, keen to work as part of the team. Like many engines, there are times when he may want to run away and be left alone and he may not be quick to stick up for himself either, but when there is someone in need, Luke is passionate about showing how much he values his friends and will bravely heave into action without second thought.

Luke is based on the Kerr Stuart 0-4-0ST Wren Class No. 4256 "Peter Pan", albeit modified with an enclosed cab, added buffers and regauged to 2ft 3in. 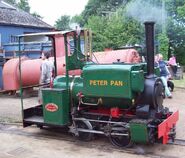 Luke is painted pea green with white lining. His name is painted in white on either side of his saddle tank, and he has brass and black number plates on both sides of his cab.