Tillie to the Rescue (cameo)

Calley is a brave rescue engine who serves as the right-hand "chugger" to Jackman, Chief's Engine to the Crotoonian Fire and Rescue Squad. Brave, motherly, and always out to help others, Calley is always encouraging other engines to do their best, and never to put themselves down whenever things go awry. Calley is often placed in charge of special details when rescues aren't about, such as delivering emergency supplies to stations or shunting equipment in the HQ's Yards.

Calley is loosely based on a Krauss-Maffei 0-6-0DH. 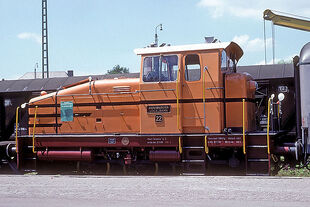 Calley is painted red and blue with red and yellow caution stripes on the front of her buffer beams. Her cab roof is also painted blue.